Off their stunningly successful Shark Race to the White House in 2016, which was one of the only polls to correctly predict the next President of the United States, researchers at NSU’s Guy Harvey Research Institute (GHRI) have identified four sharks to help predict winners in a couple of Florida’s 2018 mid-term elections. The mako shark prognosticators are:

“Once again we turn to our sharks for their wisdom and expertise,” Richard Dodge, Ph.D. said with a wry smile. “The sharks did a pretty good job two years ago, so let’s see how they do this year.”

Dr. Dodge is the dean of NSU’s Halmos College of Natural Sciences and Oceanography, which is home to NSU’s GHRI. He stressed NSU’s sharks are non-partisan.

What makes this project great is that voters – in fact, anyone across the globe – can follow the tagged sharks in near real-time online via NSU’s Shark Race to the U.S. Senate and Florida Governor’s Mansion website (www.ghritracking.org/flrace). This special-edition website allows visitors to “animate” the sharks’ tracks to see where they have traveled, how far they have traveled, and more. We also want people to share the race with others via their social media networks using the hashtag #makoprediction

Following in their fellow makos’ “fin-steps” from 2016, these sharks are the latest animal prognosticators to weigh in on an issue of state and national importance. They join the ranks of Punxsutawney Phil, the famous groundhog who lets us know annually how much longer winter will last and Paul the Octopus, the soccer savant who, in 2010, predicted the winner of the World Cup.

The race rules are very simple: each shark has a satellite tag affixed to its dorsal fin (akin to a human getting an earring.) These tags “ping” to a satellite each time the fins break the surface of the ocean, which allows researchers to follow the mako sharks as they do what sharks do best – swim around in the Atlantic Ocean. The race is scheduled to run from Fri., Oct. 16 – 3 p.m. Sat., Nov. 3. Researchers will then determine which shark in each race logged the most miles, with those sharks being named the “winners” and, thus, predict who will be taking up residence in the Florida Governor’s mansion and who will make their way to the U.S. Senate. 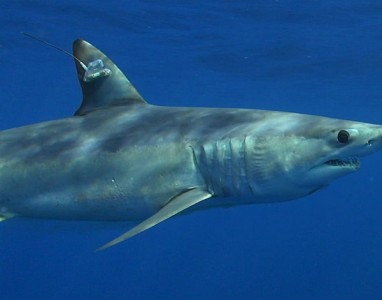 In all seriousness, Dr. Dodge points to the fact that researchers in NSU’s GHRI have been tagging and studying various shark species for many years, with the goal to gather as much data as possible for decision-makers to use in helping protect these apex predators for generations to come. In addition, NSU’s Save Our Seas Shark Research Center and GHRI scientists are conducting advanced DNA genome research on sharks to understand their remarkable immune systems, including their rapid wound healing and apparent higher resistance to some cancers.

In addition, shark research may also have important benefits for human healthcare. NSU researchers are sequencing entire genomes of sharks to better understand how sharks rapidly heal from wounds, and to see which genes underlie their potentially lower incidences of cancer. The goal is that one day these discoveries can have applications to improving human medicine.

While this shark-tracking campaign sounds relatively easy, it’s not. There are a few variables that may come into play.

First, there’s no way to guarantee that the tagged sharks will log a significant number of miles. While they were caught, tagged and released in the same general vicinity, sharks, like humans, tend to follow their own path. There’s the possibility we tagged a shark that likes to venture out into the middle of the Atlantic Ocean, while another may prefer to frequent a smaller, more familiar area.

“Some sharks we’ve tagged have tallied many miles, venturing way out into international waters while others have hugged the coastline,” said Mahmood Shivji, Ph.D., the Director of NSU’s GHRI and a professor in NSU’s Halmos College. “Over the years we learned many things about the paths mako sharks take, but each shark has its own surprises, and that’s what lets us know there is so much more to learn about their behavior.”

Something else that can impact this project – the sharks do not have any special protection just because they’ve been tagged by NSU researchers. Like their “fellow” mako sharks, they are on their own swimming in the Atlantic Ocean and are subject to the perils their natural habitat may bring.

“We’ve lost upwards of 30% of the sharks we’ve tagged since we started,” Shivji said. “It illustrates just what these animals face in the wild. In fact, our tracking studies have demonstrated that mako sharks in the western North Atlantic are being over-fished.”

And if that wasn’t enough to worry about, Shivji said there’s also the possibility a satellite tag will simply stop working, and we lose contact with one or more of the sharks.

Hopefully none of these things will happen, and the four tagged sharks will make it to the end of the mid-term races and beyond, continuing to provide NSU scientists vital data for their research. While this is a fun, light-hearted way of looking at the election cycle, the research behind this project is pretty serious. 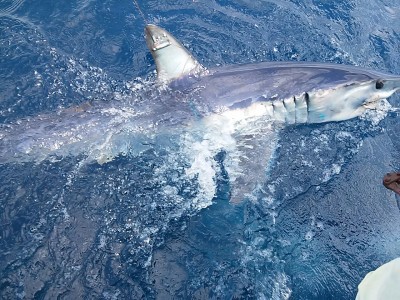 Dr. Shivji indicated that worldwide, sharks are being killed off in unimaginable numbers – some estimates say up to 100 million sharks per year.Clearly, that is not a sustainable level of removal, since many shark species, including makos, reproduce at low rates.

That’s why the work being done at NSU is vital – we must learn as much as we can about these majestic creatures so we can take steps to ensure they don’t vanish from the Earth. Research has been, and will always be, something that gives NSU an edge and is a vital part of a world-class education.

“For me, it’s the science that is most important” said Dodge. “This is a fun way to focus attention on the research NSU scientists are doing and the plight of sharks in our oceans. The work we’re doing at NSU’s Guy Harvey Research Institute and Save Our Seas Shark Research Center is critical if we are to help protect these animals.”

So as the 2018 election cycle draws to a close, make the best shark, um, candidate win!

About Nova Southeastern University (NSU): Located in beautiful Fort Lauderdale, Florida, NSU is ranked among U.S. News & World Report’s Top 200 National Research Universities and is a dynamic, private research university providing high-quality educational and research programs at the undergraduate, graduate, and first-professional degree levels. Established in 1964, NSU now includes 16 colleges, the 215,000-square-foot Center for Collaborative Research, a private JK-12 grade school, the Mailman Segal Center for Human Development with specialists in Autism, the world-class NSU Art Museum Fort Lauderdale, and the Alvin Sherman Library, Research and Information Technology Center, which is Florida’s largest public library. NSU has campuses in Fort Lauderdale, Fort Myers, Jacksonville, Miami, Miramar, Orlando, Palm Beach, and Tampa, Florida, as well as San Juan, Puerto Rico, while maintaining a presence online globally. Classified as a research university with “high research activity” by the Carnegie Foundation for the Advancement of Teaching, NSU is one of only 50 universities nationwide to also be awarded Carnegie’s Community Engagement Classification, and is also the largest private institution in the United States that meets the U.S. Department of Education’s criteria as a Hispanic-serving Institution. For more information, please visit www.nova.edu.