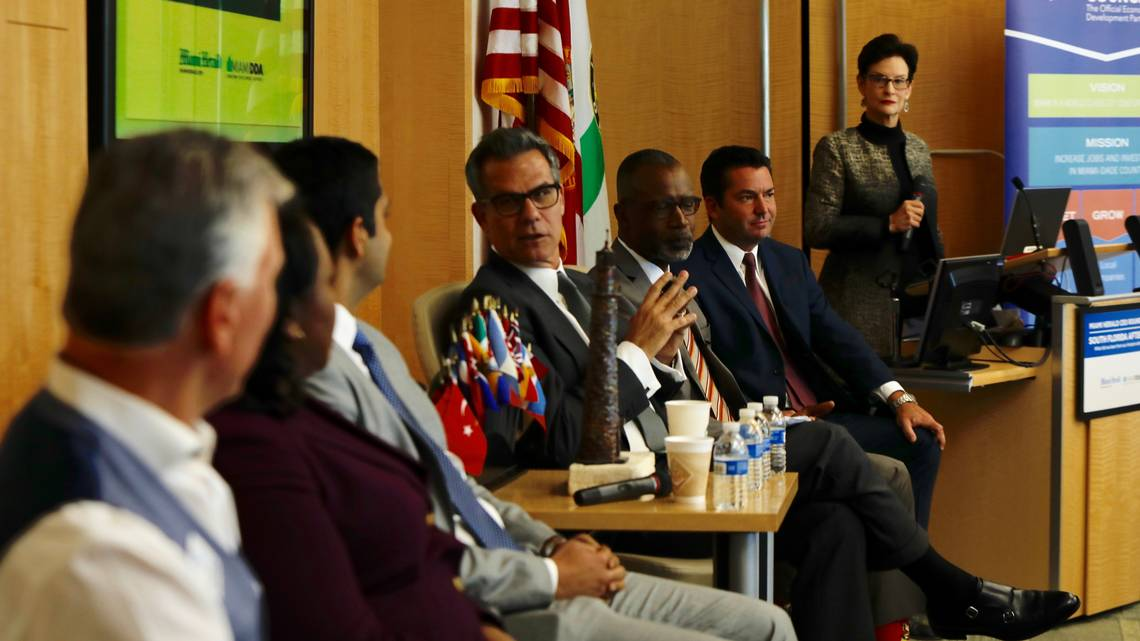 South Florida’s bid to attract Amazon’s HQ2 may have come up short when it came to landing the big prize. But in a panel discussion Tuesday, regional leaders said the bid process itself has galvanized the tri-county area to think and work more collaboratively.

“This process showed an extraordinary level of regional cooperation, done in a record amount of time,” said urbanist Richard Florida, who led the discussion of the panel, “What Did We Learn From Our Amazon Adventure.”

The panel, which drew about 80 attendees, was produced by the Miami Herald, the Downtown Development Authority and Florida International University’s Miami Future Urban Initiative, which Florida leads. It was hosted by the Miami-Dade Beacon Council.

Michael Finney, Beacon Council president and CEO, echoed the sentiment. He recounted how he’d initially hesitated about approaching Miami-Dade Mayor Carlos Gimenez about the idea of a region-wide pitch — only to find Gimenez was fully on board with the idea.

“It was clear that the young folks working for Amazon, some significant portion would want to live in Miami, even if Palm Beach or Broward won the site,” Finney said. “There was an incredible potential for a win-win.”

As part of the ongoing regional collaboration, the Business Development Board of Palm Beach County (BDB) will be hosting a tri-county executive leadership meeting in Palm Beach County Friday, Feb. 15. The meeting will be composed of the executive board members of the Beacon Council, the Greater Fort Lauderdale Alliance, and the BDB.

Few new details about Miami’s bid emerged Tuesday. Finney said a total of 54 South Florida business, academic and political leaders had signed nondisclosure agreements in the run-up to the bid. Seven of the nine Amazon delegates who met with Miami’s delegation were “millennials” and showed particular interest in advanced-degree and post-graduate opportunities (along with happenings in Wynwood and the Design District).

Shereena Coleman, vice president of business facilitation and The Glades region at the Business Development Board of Palm Beach County, which participated in the Amazon bid, said South Florida has still not conquered its longstanding brain-drain problem. Last year, a report from real estate group CBRE showed more tech graduates were moving out of Miami-Dade than coming in — although that was not the case for Broward.

“No one is coming here if the talent isn’t here,” she said.

Speaking as the lone non-South-Floridian on the panel, John Boyd — a relocation specialist and resident of Princeton, New Jersey — said that the Miami metro’s inclusion on Amazon’s finalist list was nevertheless a signal that other companies like Amazon — and perhaps even Amazon itself — would now bump the Miami metro region up on its list of relocation landing spots.

A spokesperson for Amazon did not immediately respond to a request for comment.

Still, other firms are now taking notice, and all panelists said they had seen an uptick in relocation interest as a result. “We now have a treasure trove of contacts, of people paying attention to what’s happening in Miami,” said Finney.

Boyd added that the biggest recent development for South Florida’s reputation in the corporate world was the advent of Brightline, now rebranding as Virgin Trains USA. Relocation promoters and companies are focusing on “regionalization,” including assets that may not be physically close but which can be easily reached. The ability of Brightline to connect the tri-county area will prove a key asset, he said.

“Miami is considered a world class city now,” Boyd said. Brightline “now puts it in the minds of global executives.”

At the local level, the construction of Miami Central Station means the beleaguered, inter-county Tri-Rail line will finally have a downtown destination. That will open up the region to everyday commuters, said Nitin Motwani, managing principal of Miami Worldcenter, a major real estate project downtown, and co-chair of the Downtown Development Authority’s economic development committee.

Motwani said the bid had the effect of breaking “the invisible line” that many South Florida residents recognize as dividing Miami-Dade from its county neighbors to the north.

Finney said that the tide would soon begin turning from seeing rail projects as not-in-my-backyard nuisances to desirable assets as property values increase, noting that this is usually how transportation-oriented development works in most other cities.

David Coddington, vice president for business development at the Greater Fort Lauderdale Alliance, said developments like this would give the region an opportunity to brag about itself, something it has been too shy to do in the past.  And telecommuting has made the region all the more desirable. Coddington’s new suggested motto: “Work in the cloud. Live in the sun.”

Rob Wile covers business, tech, and the economy in South Florida. He is a graduate of Northwestern’s Medill School of Journalism. He grew up in Chicago.