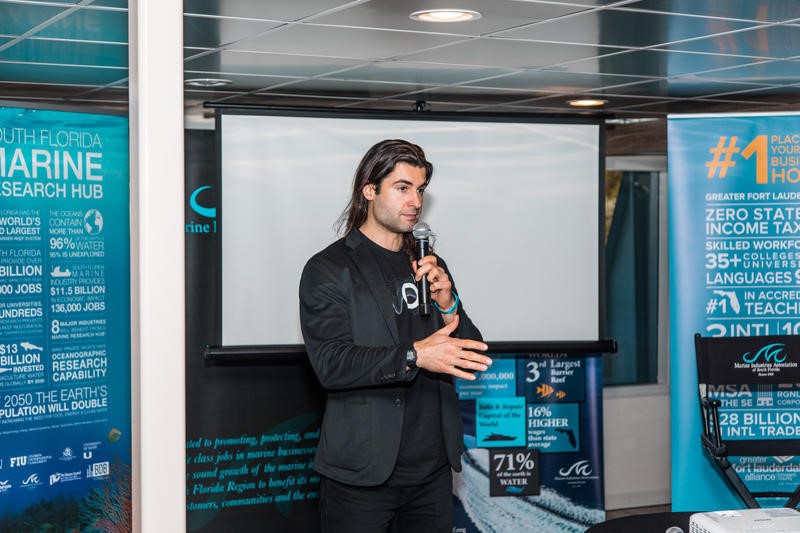 Inside of the Fort Lauderdale International Boat Show is a movement to connect environmental entrepreneurs with philanthropists who love to boat and are passionate about ocean health.

The Marine Research Hub in South Florida meets at the boat show every year. This year, the hub brought the Ocean Exchange event to Fort Lauderdale for the first time. Together, the collaborative groups awarded money to companies that are working with carbon waste and developing more efficient batteries that could be used in marine vehicles.

"We believe that many solutions exist. They not only need money - they need early adopters, they need access to specialized testing equipment, they need a lot of help," Millicent Pitts said, Ocean Exchange's executive director. "And that's what we do: We find, fund and foster these startups," she said.

One of the two companies to win $100,00 this year is called Opus 12 and it's based out of Berkley, California.

Nicholas Flanders, co-founder and CEO of Opus 12, says they specialize in "industrial photosynthesis."

"It's a chemical process that breaks apart CO2 and water, and then our technology can recombine the bits to make new products that are usually made from fossil fuels," Flanders said.

He also said he plans to use the award money to scale up the company by purchasing a larger robot for its core technology.

The company already has a contract with the U.S. Air Force, Flanders said, which ties back to boating in a more environmentally friendly way.  "We're making jet fuel from CO2 and as part of that project we'll also be making some diesel, which could run a lot of these ships here in the harbor, so we'd love to see some carbon-neutral yachting in the future."

The other company that was awarded $100,000 this year is called Noon Energy. It focuses on developing batteries that more efficiently store energy and integrate solar and wind renewable electricity.

Phil Purcell, president and CEO of the Marine Industries Association of South Florida, as well as vice president for the Marine Research Hub's Board of Directors, said the boat show is the place to show investors what entrepreneurs like Flanders and Noon Energy are doing with new technologies.

"Using the platform of the show - knowing the best and the brightest people in the world come here - we can create the awareness to these yacht owners and family offices that, hey, here's another opportunity to invest and help change the world," Purcell said.